Mountains and moorlands dominate our landscape and are an important part of our national identity. They cover around 60% of our land area and form the largest extent of undeveloped wildlife habitat remaining in Britain.

The main habitats on our hills and moors are heaths, grasslands and peat bogs. These upland habitats stretch from the mountain tops down to the limits of enclosed agricultural land and onwards to sea-level in the far north and west.

From the ubiquitous heather to the rare mountain willows and from the mountain hare to the golden eagle, the plants and animals that live here are adapted to cope with the cool, windy climate and extremes of wet and dry.

Heathland is defined as being above the limit of enclosed agricultural land and below the montane zone at around 600m, it is widespread across the Scottish hills.

Heath is a typical habitat of the cooler oceanic areas, heathlands are found throughout Europe, but the habitat is only extensive around the western oceanic fringes of Europe.

The rich purple and pink of a late summer heath is an iconic sight of a Scottish hillside. The heathland is a characteristic component of the Scottish landscape although it is only maintained through human intervention.

The heath is much more than just heather – there are a variety of species which are heath specialists including hen harrier and adder.

The UK supports a high proportion of the European heath, with outstanding diversity in both the wet and dry habitats. Upland heath in Scotland covers between 21% and 31% of the area of Scotland so it is a very substantial and important habitat – the European stronghold.

Why are heaths important?

Heaths provide benefits for people too:

Blanket bog is only found in few parts of the world with cool, wet, typically oceanic climates. Under these conditions bog mosses and other plants break down very slowly and gradually form a layer of peat. Peat depth varies, with an average between 0.5 and 3 metres but depths of up to 8 metres are not uncommon.

Blanket bog is found throughout the Scottish uplands but is most extensive in the north and west in areas with gentle slopes and poor drainage. It is the habitat that dominates the landscape of the gently undulating moorlands, particularly in the North Highlands and Western and Northern Isles.

Blanket bog is one of the most extensive semi-natural habitats in Scotland, covering some 1.8 million hectares, 23 % of our land area. Blanket bog is a rare habitat globally and Scotland holds a significant proportion of the European and world resource.

Why are peat bogs important?

Peatlands are a living landscape. Peat builds up at different rates and forms patterns of hummocks and hollows. Viewed from the above the wide expanse of peatlands is studded by lochs and lochans.

Our peatlands are lands are known for their moorland breeding birds, and interesting plants, like the insectivorous sundews and butterwort. However, the humble bog moss Sphagnum drives the process of peat formation.

The upland grasslands are considered as everything above the enclosed agriculture limit, although they can be found right down to sea level in the north west.

Upland grasslands are characterised by the diversity of species, often very herb rich, supporting many wildflower species and native grasses. This is a haven for upland invertebrates including the rare vertigo snail – a priority species. The fragrant thyme and the buzzing of insects is an indication if the richness of our grasslands. The smaller invertebrates attract larger animals that feed on them, so the grasslands – although small – are a very important habitat for many species.

Small in extent – but significant

Upland grassland is found throughout Scotland, often associated with rich underlying geology that supports the variety of species.

Upland grasslands can be quite small, fragmented habitats that form part of a mosaic of different upland vegetation types. The grassland component may not cover a particularly large area, but it is very important. In Scotland upland grassland is thought to cover less than 1% of the land mass.

Why is it important?

Upland grasslands attract many animals. The rich vegetation provides good grazing for wild deer, as well as being used for summer grazing by sheep. This keeps the grassland in good condition by ensuring that the vegetation does not become overgrown by less desirable species.

Grasslands are an important upland habitat allowing flowers to thrive and seed successfully. However they are susceptible to trampling and over-grazing, so a fine balance must be maintained.

Mountain heath and willow scrub is one of the most natural habitats that we have in Scotland. The windswept open landscape can look inhospitable, but it supports a surprising diversity of species. Once up above the tree line, the trees that do stand up to the elements are twisted and very slow growing.

Mountain heath typically occurs above the tree line usually above 600 metres. Heaths dominated by heather (Calluna vulgaris) and blaeberry (Vaccinium myrtilus) support a diverse population of plants and bryophytes. Where willow trees do grow, they often have the twisted growth form known as Krummholtz.

These habitats form mosaics with montane grasslands and moss dominated sedge heath. Scotland supports the majority of the UK distribution of the snowbed communities and upland willow scrub.

Scotland is thought to support around 60,000 hectares of this habitat although the full extent has yet to be surveyed. Scotland supports more than 98% of the UK habitat, although it only makes up 0.8% of the surface area.

Montane heath and willow habitats include some very exposed areas and patches of late snow lie. The altitudinal range can be from around sea level to some of the most exposed mountain locations. These extreme habitats support species that are at the southernmost extent of their distribution.

This relatively limited habitat (upland heath covers between 21-31% of Scotland) supports a good number of rare species including netted mountain moth, mountain burnet, Willow species and many rare bryophyte and lichens. Typical bird species include ptarmigan and dotterel. Both breed in these habitats.

Inland rock, including scree and rocky slopes, is an important component of any mountainside. The sharp ledges and rocky scree slopes support a wide diversity of species. These habitats are often quite limited in extent and can be fragmented. They occur most frequently at high altitude.

Inland rocky areas are split into two groups, calcareous (or lime rich) or siliceous (or acid rich). However, it is not unusual to have a siliceous rock with a calcareous band running through it, which allows plants with different requirements to grow close together in the cracks in the rocks. This variety allows a wide range of plants, bryophytes and lichens to flourish.

The vegetation is often afforded some protection from herbivores due to the inaccessible and unstable nature of the rocky habitat.

This habitat is difficult to map as it occurs as part of a mosaic of other habitats and can cover very small areas. Geological maps can sometimes help to identify potential areas of interest. There is no exact figure for the area covered by this habitat, although it is likely to be a very small percentage of Scotland’s land cover.

Why is inland rock important?

Inland rock is very important as it supports many rare species that demand the conditions provided by the rocky slopes. The enriched soil means that the plants will thrive. However, the diversity and rich vegetation do make these rocky areas very appealing to herbivores, so this fragile habitat can suffer from overgrazing.

Areas of inland rock need a fine balance in terms of grazing, as they can also suffer decline if grazing is too low. This allows the surrounding scrub to encroach onto the rich rocky areas and the more delicate species are ‘out-competed’.

The hills and moors of Scotland support some of the most iconic Scottish species, the red deer, the mountain hare, the golden eagle and the grouse.

The classic stag against a rugged backdrop is a classic view that many people will associate with Scotland. The country supports the largest population of red deer in Europe. The roar of the stag can be heard in many glens during the rut. However, a fine balance needs to be struck to maintain the ecology of the moorlands. Insufficient grazing by deer may mean that vegetation becomes overgrown and rank. This prevents seeds from reaching the soil and germinating. Too much grazing and the plants do not get the chance to flower and seed. So controlling deer numbers is necessary.

Recreation is a very important upland activity with deer management in Scotland thought to be worth over £100 million annually to the economy and grouse shooting an estimated £30 million a year.

An instantly recognisable bird of the uplands is the Golden eagle. Its effortless flight soaring over the mountains shows this powerful bird to be an agile hunter. The eagle likes to make its nest or eyrie on rocky inaccessible outcrops where it will be safe. Some nests are used for many years and become very large as they are built up year after year.

The eagles feed on a variety of food from dead deer or sheep, and the gralloch left by stalkers. Rabbits and mountain hares are also on their menu.

Mountain hares or blue hares are our only native hare. They have developed a clever approach to camouflage. In winter, when there is snow on the ground, the sharp eyes of an eagle would easily be able to spot a dark hare against a backdrop of snow. So the hares change their coats. In winter time, they have a thick white fur coat to blend in with the snow. Come summer time and the snow melts, a new coat is needed, so the hare moults and develops a brown (sometimes tinged blue) coat that allows it to blend with the heath more easily.

Mountain hares are often seen on grouse moors – upland areas  managed to encourage grouse. Grouse and the associated activities make a significant contribution to the rural economy, as many people visit the uplands for sporting pursuits.

Grouse moors cover large areas of the uplands. The vegetation is burnt or cut into strips to ensure a mosaic of young plants and shoots for food and taller more mature plants to provide shelter. This management leads to the ‘patchwork’ effect seen on many hillsides 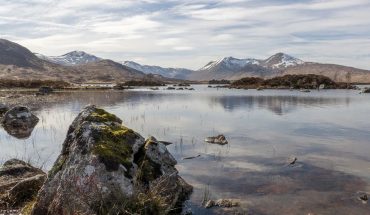