Keiss Castle was originally called Raddar, a medieval fortification of which no history survives. In the late 16th or early 17th century George, Earl of Caithness founded a stone Z-plan tower house on the site and was abandoned in 1755. The original entrance was destroyed by the cliff face falling away. It appears to have built purely for seaward attacks as there is no strong evidence of protection from the landward side. It stands in the grounds of the new castle, and there didn’t appear to be any clear access to the tower. The old Scottish castle, the beautiful noisy waves splashing, the cliffs, all absolutely magnificent. This is a listed property of The Royal Commission on the Ancient and Historical Monuments of Scotland (RCAHMS).

The central rectangular tower is of four storeys, with an attic, the basement is vaulted and on two angles are round towers, one being the stair tower, which supports a square caphouse. On the diagonally opposite corners of the tower are two projecting circular wings rising to the same height as the main building. One on the north-west angle contained the staircase to the first floor now also gone.

Keiss Castle occupies one of the most dramatic locations at the top of sheer cliffs overlooking the sea at the Northern end of Sinclair’s Bay. The castle was eventually turned over to the Sinclairs of Dunbeath. They replaced it with the new Keiss Castle built in 1755 further from the cliff. Standing against the sea cliff, erosion has collapsed the north-east angle of the tower, which contained the entrance. 6 miles south is Girnigoe Castle and 12 miles north is Castle of Mey.

The current New Keiss Castle which is still in use as a private residence replaced the former Keiss Castle on the shoreline in 1755 and was originally known as Keiss House. Over one hundred years later in 1860 the house was completely made-over and many new additions gave it the appearance of a castle. The castle is actively collapsing into the sea, and one of the towers has fallen off the cliff. The ruin is very dangerous.

The castle consists of a central rectangular tower with round towers on opposite corners. The walls are not very thick.

How to get there:
Keiss Castle is located east of Keiss, off the A99 and and south to Stain. 10 miles south of John O’Groats and 7 miles north of Wick., on the A99. The site is freely accessible in daylight hours. There is a car park at Keiss Pier/Lang Head. 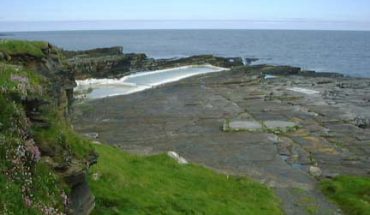