In Kirkwall, every year at both Christmas and New Year a game is played that involves nearly all of the men and boys of the town. This traditional game of mass football is played in the streets of the town between the Uppies and the Doonies; each team representing one half of the town. Kirkwall also has the most northerly of the world’s Carnegie libraries, which was opened by Andrew Carnegie and his wife in 1909. The building survives, although the library itself has since moved to a larger building on Junction Road. The game has been played for at least two centuries and has become an important part of Kirkwall’s heritage.

A cork filled, leather bag, known as the ba’, is thrown into the air at the Mercat Cross outside the St. Magnus Cathedral. Hundreds of men or boys depending on which game is being played, will endeavour to get the ba’ to their goal.

There are two teams that play, the “Uppies” and the “Doonies”, from the upper and lower parts of the town. There are no social rules to the game and if you look, you will see that all doors and windows in the town have holes at either side so that boards can be fixed to them for protection.

It is not uncommon for people to land in the harbour and when a huge struggling mass of people are all fighting for control of the ba’ you will often see a cloud of steam rising from them!

The Men’s Ba’ is thrown up at 13:00 at the Mercat Cross on the Kirk Green opposite the Cathedral, usually by an older Ba’ stalwart, but occasionally by some public figure, with up to 200 players eagerly awaiting the chime of the bells. The Ba’ disappears into the scrum, which may spend some considerable time on Broad Street. Much exciting surging and turning play often occurs on this wider part of the street, which can frequently determine the final outcome.

‹ What to See and Do in Kirkwall, Orkney up Kirkwall Bay and Harbour › Similar of ‘Kirkwall Ba’ Game’ 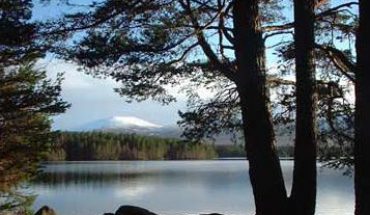